Action based Anime MMORPG - Switch between any class whenever you want in the high fantasy world of Twin Saga.

Twin Saga is the latest high fantasy setting MMORPG to come out from Asia and offers a promising outlook for the genre by putting the power of choice in the hands of the player. rassembler du matériel ou forger. The game features 10 different classes that players can swap between freely at any time without cost or restriction. Player housing also takes a different approach – the Terracottage is a mobile house that can move like mounts, and is a place where guilds and friends can hang out, gather materials and even craft.

If you enjoyed games like Final Fantasy, Ragnarok and Kingdom Hearts, Twin Saga’s 3D art style and animations will definitely appeal to you as it hovers between anime and cartoon, but the graphics do look a little aged which is surprising.

Overall, Twin Saga is a fairly good MMORPG that contains rich lore and story that is complemented by a fast-paced action combat system that suits the art style. There’s plenty to do in PVE ranging from hidden quests, Astral Adventures and Dungeons, while the competitive players can try their hand at PVP in arenas or battlegrounds. Ultimately, Twin Saga should be credited for its fresh approach but doesn’t do enough to stand out from the MMORPG crowd.

When it comes to Asian MMORPGs, the race is always on to create the best looking game and Twin Saga stands out as one of the most attractive of the lot. The game features an art style that jumbles the best of Final Fantasy with Kingdom Hearts and as a result, Twin Saga’s world and character design is undeniably cute and easy on the eye. Unfortunately, the same cannot be said about the graphic fidelity of the game. While the animations for character movement and combat work seamlessly, the quality of graphics for environmental textures, object textures and character models look bland and that’s partly due to the engine that the game is running on. The in-game UI however, is great to navigate with ease and the only thing lacking is the option to move elements of the UI around. 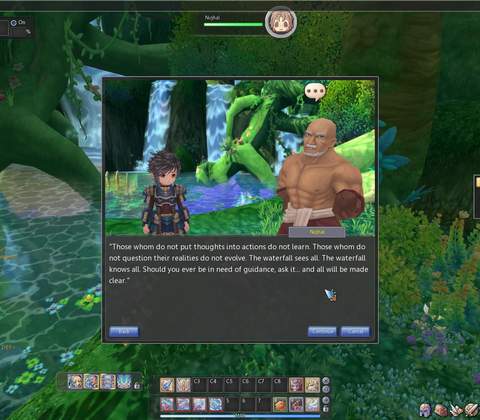 Twin Saga isn’t shy about its rich amounts of lore and heavy emphasis of the game’s story. From the moment players step into the world for the first time, they are immediately introduced to the main plot through a standard and linear story quest-line that features in-game cinematics with dialogue that are sometimes voiced in Japanese with English subtitles. Players will probably enjoy the writing as the game never takes itself seriously, often using satire and self-deprecation in its delivery. But in the first couple of hours, the amount of time it took for different characters to divulge the simple information that you are the chosen one in a civil war of the gods can become frustrating, as it takes countless repetitive and cringe-worthy dialogues and mundane fetch quests to progress the main story quest. If the bore doesn’t get to you, then the scale of information will, as some characters just happen to force heaps of plot and backstory down your throat in the same cutscene that lasts almost five minutes. For a new MMORPG that wants to invite players to dive into the world and soak in the story, this one example of how not to deliver your main PVE quest lines. 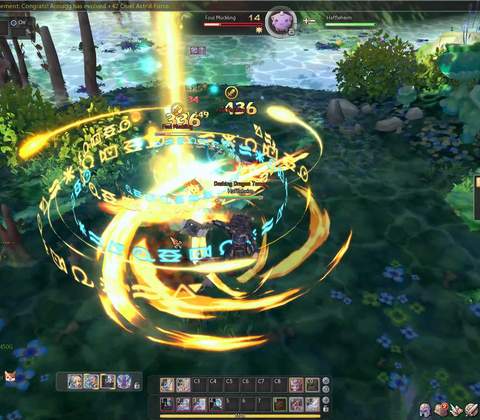 Combat systems play a large role in deciding if an MMO is fun to play, and for the most part Twin Saga has got its combat system working just right. The game uses action style combat that requires players to use their class skills located on their hotbars, and with 10 classes to choose from, combat does feel fast paced and fun with all the different abilities at one’s disposal. Executing basic attacks and skills will build up the SP power bar and once filled, players can then use their class’s ultimate ability skill proceeds to play a short but awesome looking cinematic of your character taking out mobs or opponent players in creative and unique ways. What isn’t great is that for each of the classes, there’s only a limited amount of skills within the game and more must be unlock the higher you level. This can make the combat feel very repetitive during the early levels and do expect to be mashing buttons frequently until that SP bar is filled.

How It Differs From Other MMORPGs 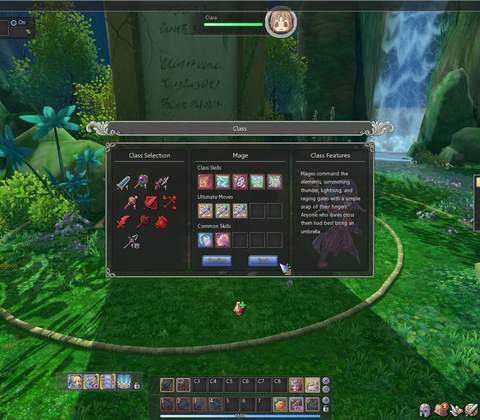 The biggest x-factor Twin Saga has is definitely how it allows players to switch classes on the fly without any restrictions or cost, provided players are not in combat. This feature does away with the need to create multiple alts to experience the game’s 10 different classes on one character. It makes finding groups a breeze as you can always switch roles to a healer or tank to fill in the blanks. Another cool feature the game hypes up is its Terracottage system – a mobile house for players with which they can hang out with friends, farm materials for crafting and of course, move it at will, almost serving as a secondary player mount.

For players who like party-based combat, the Senshi system lets players recruit a wide range of companions to fight alongside your character in PVE combat. You can summon up to three companions at once and are able to level their stats, upgrade their gear and alter the way they look. Finally, Twin Saga also adds a fresh approach to PVE questing, with the addition of an ‘auto-pilot’ button, and when clicked, players will automatically move to objectives within the main story quest without needing to manually navigate. All you have to do is then complete the stated objectives and click the button again to robotically return to the quest giver. Many might think that this feature will only serve the lazy, but it’s a popular feature and will no doubt offer players some degree of convenience that other MMORPGs can’t.

Perhaps more disappointing is how the core gameplay is just like any other MMORPGs out there, and all the usual suspects such as daily grinds and chat restrictions do exist. The game has PVP in the form of Arenas and Battlegrounds to complement other in-game activities such as fishing, crafting and dungeons but they offer nothing significant or groundbreaking in terms of diversifying the core MMO experience. The one area where Twin Saga tries to shake things up is in PVE questing, and offers loads of hidden quests that reward players with titles, equipment and good amounts of XP. From level 10 onwards, Astral Adventures becomes another PVE questing option that offers players 10 daily quests in which they can take part in their own adventure by deciding the outcome of the quests. While that sounds good on paper, players will be disappointed to know that they won’t be doing any questing. Instead, these Astral Adventures are dialogue driven sequences that play out in cutscenes and you pick the outcome directly through the dialogue options, which is hardly any fun.

At later levels, character progression slows down considerably and the grind for XP sets in and the only way to counter this would be to continuously grind hidden quests, Astral Adventures on top of doing a hefty amount of PVP and Dungeons. At the end of the day, this feels like a missed opportunity for Twin Saga – the game could do with more ways to advance character progression which will undoubtedly make it one of the best Asian MMORPGs on the market today.

The in-game shop is surprisingly passive, and while there are a couple of annoyances such as needing to buy a megaphone from the store to talk to the world chat, the store is unobtrusive with no signs of pay to win. Even better yet, Twin Saga does a good job of rewarding players with Loyalty Points for playing regularly that can be used to buy cosmetics and convenience items from the store.

Twin Saga does a fairly good job at reinvigorating the Asian MMORPG market with its heavy focus on story and by giving players the option to freely swap between 10 classes, which provide both convenience and fun thanks to the fast paced combat. While other interesting features such as mobile housing and Astral Adventures were built up as game changing experiences, it isn’t substantial and Twin Saga can’t hide the fact that it hasn’t done much else to reduce the eventual late-game grind and core MMORPG systems which are unfortunately ordinary.

Ready to enter the world of Twin Saga? Click here to play now! 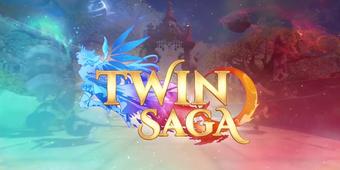 Originality
The ability to switch between the game's 10 classes freely provides great convenience and fun for players, while disregarding the need for alts and long group queue times.

Ability to switch between classes at will

10 different classes that are fun to play