Dedicate your life to the training of martial arts until your last breath. Sent from China with love is the Age of Wulin!

Age of Wulin is a free-to-play MMORPG directly from China off of which all of the game's lore and environment is based. Age of Wulin’s gameplay also has a strong Chinese base, featuring martial art moves and abilities in place of the usual fantasy setting and abilities that are found in MMORPGs.

Once you create your character the game lets you pick one out of eight Schools of martial arts which decide the base attributes to which your character will have access . Luckily every skill is available to each class, leaving the game with a lot of customization.

Periodically Age of Wulin adds new content in the form of competitions which are
essential to your success, building your School based stats and also giving you access to new skills
You have the choice to either improve your hand-to-hand combat skills or instead, other equally important disciplines that have their own advantages compared to hand-to-hand combat.

If you're interested in a world of Oriental legend proportions, Age of Wulin is a game you must try

Taking everything into consideration, we all know that if the Chinese have one thing right it's for sure their methods of combat. We've all been astonished by the grace and power controlled by martial arts masters like Bruce Lee and Jackie Chan. It's evident that the aspect of the game the developers paid most attention to was well, of course, martial arts; from the name of the title, the setting and the abilities, all have a solid base in martial arts. Age of Wulin allows you to gradually awaken your inner Jackie Chan

The Beauty of the Almond Shaped Eyes

For the accustomed MMORPG fan there will be a tiny surprise once the game begins, you'll have to make a choice between one of the eight backgrounds into which your character will be placed. The background you choose determines how your character will progress as he gains experience and where your adventure will begin. After you pick your base, or School, as the game calls it, you create your charter with the usual parameters: sex, face, clothes and so on with which you start the game. The choices aren't that varied or unique but the minimum is definitely there for a basic character creation system.

Since Age of Wulin was made by Oriental creators with an Oriental art direction the characters obviously are designed in an Asian style. A lot of the character options are done in an ideal Asian fashion so you won't be seeing much chain mail or other things that Western gamers are used to.

The Life of a Warrior

Once into the game you are immediately forced into a tutorial teaching you how to move and attack. Since we are all newcomers you cannot skip the tutorial and must complete the actions to a T. It's made evident that martial arts are the focus here and like in real life we all must learn with the aid of a master (well, at least some of us).

Clicking the mouse like a madman during combat will not suffice, you must learn, adapt and choose the best strategy for the right situation in order to succeed. Your character's strength increases through the usual competencies which are key in deciding how to adapt your character to challenges and also knowing which strategy to use.

In the game you must choose between one of the eight Schools after having been shown each School's advantages and shortcomings. The Schools are organized in order of their “goodness”, or aversion from evil, being organized into righteous, neutral and evil. The Shaolin, Emei, Beggars and Wudang are the righteous sects, proficient with small swords and hand-to-hand combat. The game's two evil sects are The Royal Guard and the Wanderer's Valley both of whom used broadswords. The neutral Schools are The Scholar's Academy who are proficient in more artful tactics employing the use of many different weapons and finally the assassin like School of Tangmen.

Not a Moment's Respite

Once could definitely say that in a martial arts world PVP is encouraged and in a game based on the mastery of such techniques is therefore fundamental in order have fun and test your capabilities. But if you aren't a fan of PVP, playing the game solo also has its own advantages and certainly will not bore you.

Mastering your chosen art is not easy but once you gain some experience the game allows your character to grow as well as play in a way that's fun to you. There's even something to amuse the pacifist in the us.

The game offers a wide variety of “homework” (don't forget, you're still in school), giving the player ways to evolve their gameplay experience even while offline, leading to better strategies and more efficient ways to play the next time you boot up the game.

It's important also to mention this game's storyline, which despite its weaker points, offers the players more than just the standard intermittent cutscenes popular with most online games. The game has a karma system which influences the character as well as the actions he's able to take throughout the plot line based on a spectrum from good to evil. Even the quests are varied enough to spice up the gameplay leading to a decently personal experience overall.

On the technical side the game has its highs and its lows but overall the technical quality is rather good. The interface is also personal, allowing the player to zoom all the way to first person view or normal view as well as being able to move the character's HUD to a preferred spot.

The in-game environment is definitely a charm and if you like Oriental culture, I'm sure you'll jump right into the game and spend a lot of time there. Unfortunately, the graphics aren't as good as the gameplay and storyline. The animations fail to express the gracefulness and speed of martial arts.

Despite the technical shortcomings, the game is still a decent sight visually at least
and its sharp Oriental art direction will forgive most of its minor transgressions.

Age of Wulin is an excellent MMORPG that takes full advantage of its Oriental feel.
The style of the game definitely brings something new to gaming in general; China and martial arts surprisingly aren't covered too often in video games. Although I wouldn't say the game is extremely difficult, on account of its uniqueness it posses a certain complexity and therefore a difficulty not seen in most games. This being said, don't fear it but take a little bit of time in order to learn the mechanics of this rather particular title. Once learned the game is a pleasure to play.

Ready to enter the world of Age of Wulin? Click here to play now! 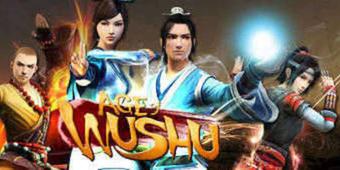 Originality
Choose from different "Schools" of martial arts. No magic or fantasy themes.

Battle system that works well with the game

The game's main shortcoming is its technical qualities